Is Your Earthing a Green Earthing?

From newspapers to e-news, hoardings to social media promotions, with revolution, modern problems have been solved with modern, sustainable, and user-friendly solutions.

For decades, leaders across the world are employing electrical earthing to protect people from electrical disasters. This mechanism disposes undesired and unwanted electrical charges to the earth or sends it back to the generator via earth mass and ensures electrical safety at places ranging from homes to large manufacturing units.

As we approach an era of global environmental crisis, this question seems to gain relevance, “Is your earthing a Green Earthing?”

THE TRANSITION TO GREEN EARTHING

Earthing solutions have also witnessed a cycle of change from traditional earthing to chemical earthing and now, to green earthing. Here’s an insight into the transition of earthing over the years:

Traditional earthing has been the most popular solution for the longest time and one of the most dangerous for our earth. It demands the usage of salt & charcoal. In the world of “electrical earthing”, chemical earthing took over with changing times.

Chemical earthing used bentonite. Bentonite is an absorbent swelling clay consisting mostly of montmorillonite. It usually is formed from weathering of volcanic ash in seawater. Bentonite, as a swelling clay, has the ability to absorb large quantities of water, which increases its volume by up to a factor of thirteen times however it has a tendency of shrinkage or cracks.

However, both these electrical earthing solutions lacked the focus on one of the key factors, the environment. While traditional earthing required cutting of trees and burning them to produce charcoal, bentonite-based chemical earthing leach away, and surrounding soil is polluted with chemicals like sodium or calcium sulfates and it requires water for regular maintenance.

The Invention of Marconite & Its Usage

The search for a solution that was both user-friendly and environment-friendly ended six decades ago. In 1972, engineers at the company founded by a Noble prize winner and Italian inventor, Guglielmo Marconi’s company invented a premium conductive material, Marconite, which was designed for green earthing solutions.

This was the revolution that incepted the new era of earthing solutions with a material that does not need water to conduct electricity. Marconite is mixed with cement to form conductive concrete encompassing the earthing systems, which is a great replacement for other solutions.

WHAT IS GREEN EARTHING? 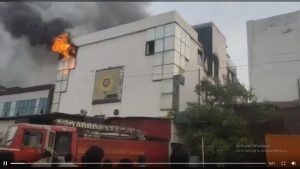 Most Fire Incidents Happen Due to Electrical Short Circuit Green Earthing Solution For Your Home!

Intertech’s cutting-edge qualitative services have developed trustworthiness & goodwill among its clients. Marconite earthing solutions are developed to cater to…